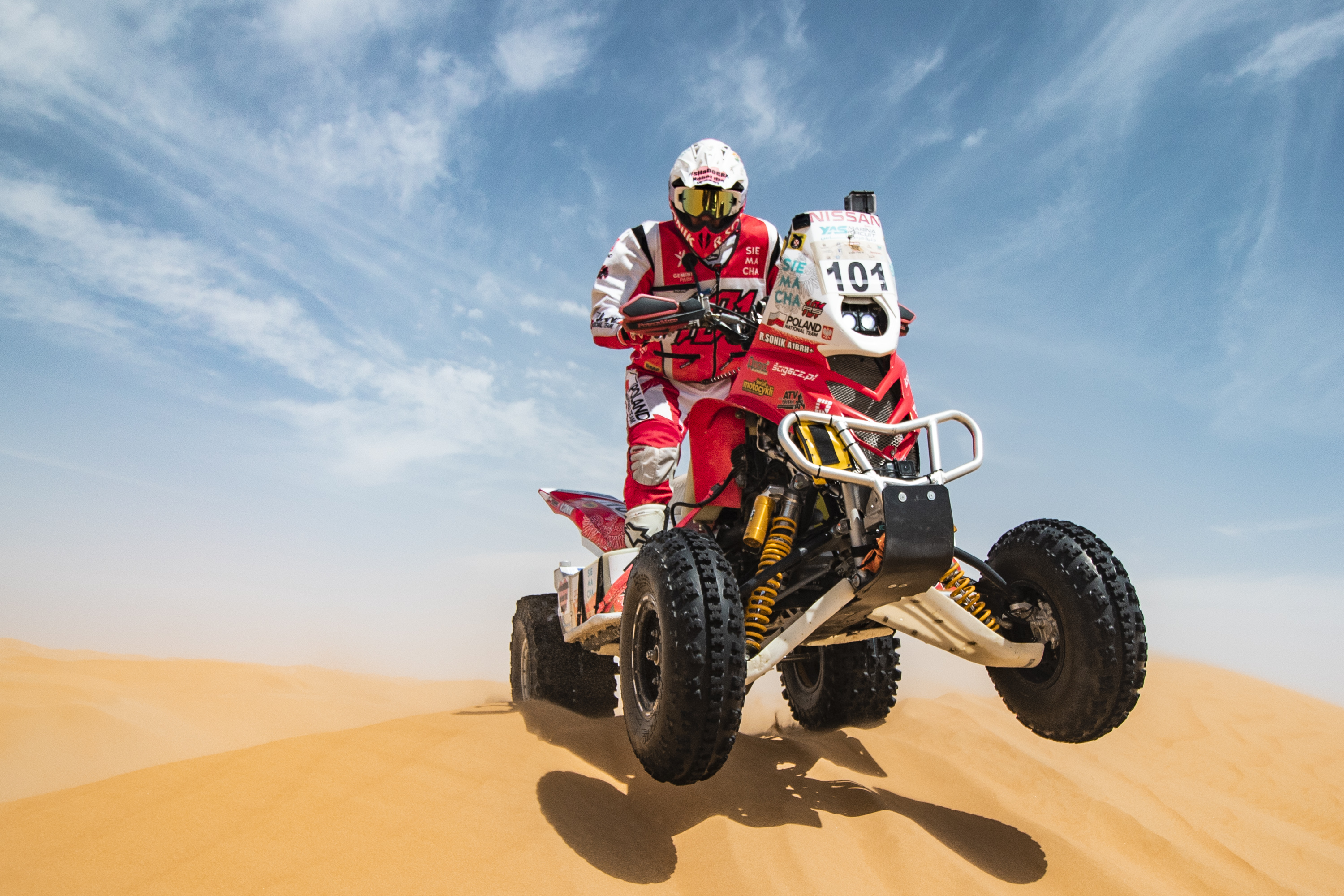 Rafał Sonik began the FIM World Cup season with a double podium at the Abu Dhabi Desert Challenge. The Pole was second after a fierce fight in a quad category and won the veteran classification in which he successfully challenged 12 motorcyclists. “After a serious injury, a year of physical therapy, and a struggle to get back in proper shape, I am most happy about my steady and strong pace, which I was able to maintain for five days of a demanding race. This is a harbinger of a great season and the Silk Way Rally that’s coming in July”, commented Sonik.

The last stage of the Desert Challenge required considerable effort from Rafał Sonik. To win, he would have to not only make up for the 5-minute loss to Fahid Al-Mussalam but also escape the pursuit of Aleksander Maksimow. The Pole imposed a fast pace right from the get-go and managed to overtake the Kuwaiti in the second part of the SS. The advantage, however, was not enough to even out the loss, and so the Arabian quad rider repeated his past accomplishment and won the challenge in Abu Dhabi.

“It was a tight race. No other class recorded similarly slight differences between the opponents as the quad class. Even in the veteran classification, I had a clear advantage over my rivals, even though it was a big bunch of seasoned bikers. David McBride has lived and raced here for many years now and Mohamed Al-Shamsi has tackled these dunes possibly with every type of vehicle; he knows this area inside out. The fact that in the combined classification, the quad drivers placed right after the first ten motorcyclists indicates that we were able to keep a steady and strong pace throughout the last five days”, noticed the 7-time FIM World Cup winner.

“My result indicates that we did not waste our time last year”, continued “SuperSonik”, “My physical therapy, training, getting back on a quad, and three FIM World Cup rallies raced in barely fair condition, it all had led us to the start of a new season.  My team is physically, mentally, and technically ready for undertaking the biggest challenges. There are no doubts or second thoughts when it comes to reaching for the most ambitious goals. We climbed a steep path to see the peak again, and now… now we attack”, said Sonik with a huge smile.

The results of the rally in the United Arab Emirates is very promising also in terms of fighting for the FIM World Cup trophy. “It appears that Fahid Al-Mussalam will not participate in the Silk Way Rally in July. Thus, the second place, ahead of Aleksander Maksimow is a real advance before the next race. It is a sign that we are in the game before a new and enormous challenge, which is the competition in Russia, Mongolia, and China. I will spend the next three months to complete that formidable, 10-day long, world cup round in a similarly good mood”, he added.

Now comes a long break for both the FIM World Cup motorbike and quad riders. The next stop on the FIM calendar is the Silk Way Rally which starts in Irkutsk on July 6th and ends in Dunhuang on July 16th.